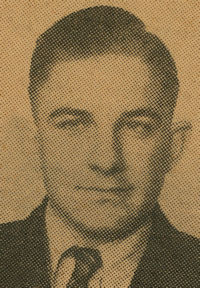 He wa secretary of his sophomore class home room and is a First Class Boy Scout. His hobbies are model airplane building and drawing of planes.

Russell Albert Norton of Fairland, OK passed away July 30, 2014, at the Muskogee VA hospital at the age of 93. Born in Redfield, SD, May 21, 1921, to Daniel Dodge Arthur Norton and Cora Lona (Spicer) Norton.
Russell was preceded in death by his parents, brother Donald Norton and sister Merna Statten.

For a time he attended Oklahoma A&M in Stillwater, OK.

In 1956, partnering with his parents, Russell bought 76 acres near Fairland, OK where he farmed and opened an auto repair shop.