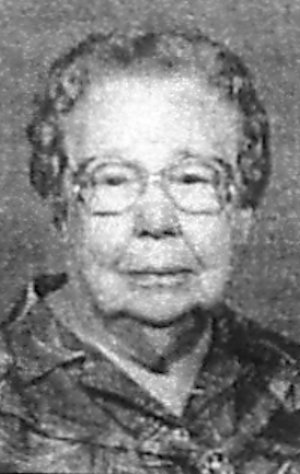 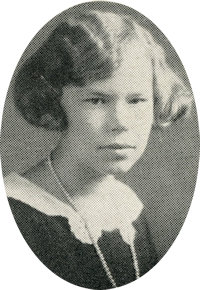 Ruby was born June 3, 1908, in Lucien, Oklahoma to Edgar H. and Ida May (Stanford) Lighty. The family came from near Piper City, Illinois, to reside on the farm south of Lucien in 1907. They moved to Perry, Oklahoma in 1915 where her father began employment with the U.S. Postal Service as a rural mail carrier.

Ruby and James Everett Morrow were married on June 24, 1934. At this time, Ruby became a homemaker and Everett was engaged in the lumberyard and construction business.

Ruby was an active and lifelong member of the First United Methodist Church of Perry, Oklahoma, participating in the construction of the original church building at Seventh and Elm streets. She devoted many hours of service to her church and community and to the Camp Fire and Boy Scouts organizations.

Ruby was preceded in death by her parents; her husband, Everett, on January 2, 1997; one sister, May Lau; three brothers and two sisters-in-law. Roy and Lillie Lighty, Ivan and Nadine Lighty and Glenn Lighty; and one grandson, Alex Zeighami.

Funeral services will be held at 2 p.m. on Thursday, November 29, 2001, at the First United Methodist Church in Perry. Rev. Ron Weathers will officiate. Burial will be in Grace Hill Cemetery, Perry, Oklahoma. Memorial contributions may be made to the First United Methodist Church, 501 Seventh Street, Perry, Oklahoma 73077, Camp Fire Boys and Girls. Boy Scouts of America or the charity of the donor’s choice.