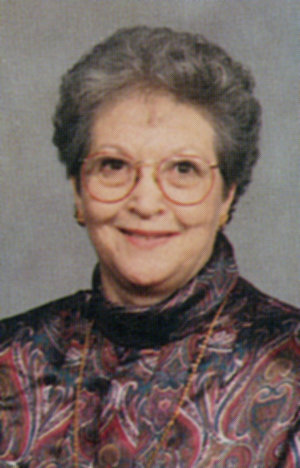 ﻿Wilma Jeanne Passow, 76, Perry, Oklahoma, was the daughter of James Edward and Lula W. (Cheek) Freeze and was born at Cleveland, Oklahoma on November 4, 1924. She died June 11, 2001, at Perry Memorial Hospital, Perry, Oklahoma.

She and Norman Elmer Passow were married on May 15, 1943, in San Bernardino, California. Her husband preceded her in death on June 22, 1989.

A resident of the local area for 39 years, she had worked as a bank teller at Exchange Bank for 25 years, retiring in 1987. She also served as Perry City Treasurer for seven years.

She was a member of Christ Lutheran Church and was active in Lutheran Women’s Missonary League unit three, a Perry Memorial Hospital Auxiliary volunteer and a member of the Noble County Family YMCA.

In addition to her husband, her parents and two sisters, Arlene Houser and Marie Billington, and one great grandchild, Brogan Watson, preceded her in death.

Funeral will he at 2 p.m. Wednesday, June 13, 2001, at Christ Lutheran Church. Rev. Van Houser, Rev. Ernest Jones and Rev. Myron C. Maltz will officiate. Burial will he at Grace Hill Cemetery. Memorials may he made to the Oklahoma Medical Research Foundation for cancer research.