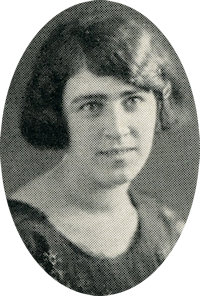 “The flower of meekness grows on a stem of grace.”

﻿Allien Frances (Adams) Kruse, 98, Perry, Oklahoma, was born September 5, 1904, near Loretto in Marian County, Kentucky. She was the daughter of E. H. and Ida L. (Brengle) Adams. At age four, she and her parents relocated to a farm northeast of Lucien, Oklahoma.

In 1920, she moved to Perry. She was a 1924 graduate of Perry High School and obtained a teaching certificate but decided to enter the business field.

She worked four years at the First National Bank in Perry, then four years in the Noble County Clerk’s office before becoming employed at the County Superintendent’s office, a position she held for 12 years.

She was a member of the First Baptist Church of Perry. On September 20, 1993, she was presented a certificate of appreciation for 75 years of continuous membership and dedicated service to the Lord and the First Baptist Church. A past matron of the Order of Eastern Star in Perry, Allien also was past worthy high priestess in the W Shrine number 10 and a member of the Social Order of the Beauceant Assembly number five at Enid, Oklahoma.

Graveside services will be at 10:00 a.m. Wednesday, October 23, 2002, at Grace Hill Cemetery. Rev. Buddy Hunt will officiate. Memorials may be made to the First Baptist Church.