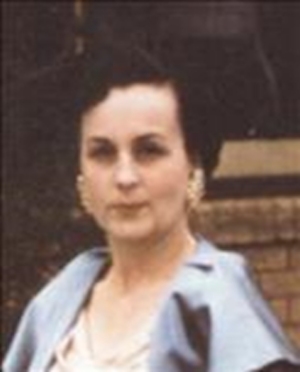 – daughter of Mr. and Mrs. Al Ritthaler, was born July 11, 1918 in Castleton, Kansas. She has attended school in Rocky Ford, Colorado, Monroe, Washington; and Perry. Oklahoma.

While a student in Perry High School she has been a member of the Girl Reserves, Red Hot Club, Glee Club, High School Quartet, Orchestra, and has been in a Junior play, and an operetta. She has won two violin contests and was awarded a gold medal and a blue velvet booklet.

Following graduation she expects to become a musician and wishes to take a special course in music study.

Lucille was born on July 11, 1918 in Castleton, Kansas to August Ludwig Ritthaler and Kathryn Frances Goering Ritthaler. She married Clarence Graham on July 11, 1938 in Perry, Oklahoma and was happily married until his death in 1985.

She was an artist, and for many years she taught art and served as the Director of Studio Gallery in Stillwater in association with Jacques Hans Gallrein, a well-known regional artist. Her paintings, along with Mr. Gallrein’s, are on display in many Oklahoma institutions: The State Capitol, Marland Mansion in Ponca City, Oklahoma State University and others. Her remaining works, along with Mr. Gallrein’s, have been contributed in her name to Oklahoma State, and selections may be currently viewed in Murray Hall.

She was a member of various business, professional and music organizations. Most importantly, she was a devoted and always loving and gracious mother, wife and daughter.

She is preceded in death by her parents and her husband.