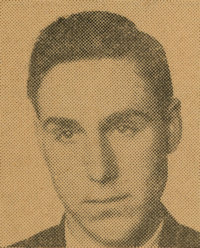 Last year he received his Junior Master Farmers degree. His hobby is working in his woodworking shop.

Mr. Blecha was born September 14, 1920, northwest of Perry in Noble County, Oklahoma, the son of Frank J. and Mary Anna (Peshek) Blecha. He attended 4-D rural school in Noble County and Stillwater Public Schools and graduated from Perry High School in 1940. That same year, he was awarded the distinction as the National Junior Farmer of America.

In 1942, he enlisted in the U. S. Army where he served as a tank instructor with the 12th Division Tank Battalion at Camp Campbell, Kentucky at the rank of sergeant. During a visit to Camp Campbell, General George S. Patton praised him by saying “You sure can drive that tank, soldier boy.” While in the service, he was widely known for his farm-boy know how.

He received his honorable discharge and upon his separation from service, returned to Noble County where he farmed the family home place. He never married. He was very industrious and independent and will be fondly remembered by friends and family as a decent and fair man who was good for his word.

He served as a school board member for 4-D School in Noble County and was a member of the Perry Co-Op Board of Directors. In addition, he served on the Black Bear Township election board for 25 years. He was a long-time supporter of the Perry F.F.A. Program and constructed model farm implements from his own designs.

In addition, he made clocks, clock cabinets, and the parts within the clocks, themselves. He cared for his mother and sister, Adeline.

He was predeceased by his parents; sisters: Marie and Adeline Blecha; and one brother, Alfred Blecha.

Graveside service will be at 2 p.m. Friday, April 18, 2003, at Grace Hill Cemetery, Perry. Memorials may be made to the Hospice of the donor’s choice.