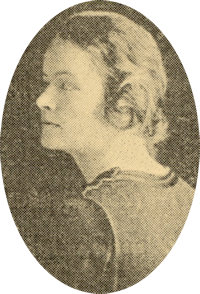 “Looks as if she were quiet,
But looks can be deceiving.”

Ms. Fait was born in Oklahoma on December 21, 1903, to Anton and Anna Hayne. She graduated from Perry High School and continued her education at the Enid Business College.

She held the position of office manager for the Exide Battery and Delco Light Co., bookkeeper for the Enid Planing Mill, and secretary for the Champlin Refining Company of Enid before her marriage to Laurence Baxter.

They lived in Beaver, Oklahoma, where their daughter, Constance, was born. They subsequently divorced and on August 25, 1947, she and Roy C. Fait were married in Elko, Nevada. They made their home in Buhl, Idaho, until his death in 1971.

Ms. Fait is survived by her daughter.