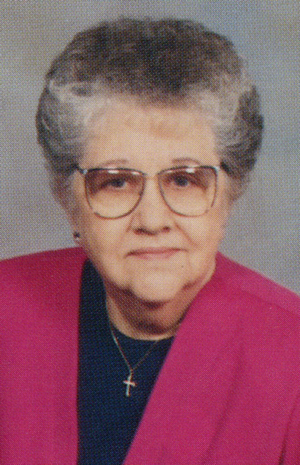 – who was married to Raymond A. Van Brunt during this school year may try to schedule some defense work along with housekeeping after graduation.

Her husband is now employed in defense work. Nadina was born in Middleburg, OK, and has spent the last eight of 18 years in Perry. Her parents are Mr. and Mrs. Frank Jordan, 519 Seventh street.

Grade school in Clinton and other education at Lawton, Chickasha, and Altus was followed by four years at Perry high school. She has been a member of the Glee club and Rainbow Girls.

She was a graduate of Perry High School. On June 2, 1951, she and Oswald Herman Karcher were married in Perry.

She was a member of Christ Lutheran Church and the Lutheran Women’s Missionary League. She and Ozzie owned and operated the bus station in the 1950s and the OK Cafe in the late 1960s. She later worked at the 89er Restaurant and retired from the restaurant business while working at the Cherokee Strip.

She was active in the local Democratic Party and enjoyed working the elections for many years.

Her husband, Ozzie, one sister, Margie Van Brunt, her parents, and two grandchildren preceded her in death.