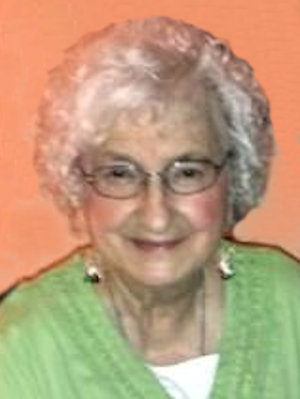 Before enrolling in the Perry schools, Marian Arlene attended Rose Hill district 32 grade school. She is a member of the local student council this year.

She probably will work in Perry after graduation.

Marian Arlene Keating, 88, passed into heaven October 25, 2016, surrounded by her family and was welcomed home by God.

Arlene was born November 14, 1927, the second of three daughters born to Frank and Mary Sykora in Perry, Oklahoma. She attended Rose Hill Elementary School and graduated from Perry High School. She married the love of her life, Jack Keating, in August 1945. Arlene and Jack had eight children.

First and foremost she was a wife and mother who spent her entire life caring for husband, children, and extended family. Arlene was a devout Catholic and a woman of great faith who spent many hours volunteering her time at her church and Midwest City Hospital.

A Mass of Christian Burial will be held at Saint Paul the Apostle Catholic Church in Del City, OK, October 28, 2016, at 10 AM with burial at the Catholic cemetery in Perry, OK. In lieu of flowers donations may be made to Oklahoma Catholic Charities.