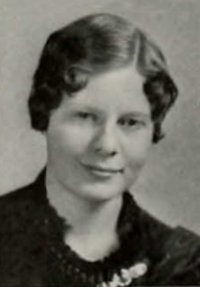 Following graduation from Perry High School, she attended the College of Emporia in Emporia, Kansas, for two years. She graduated with a bachelor’s degree in social work from the University of Oklahoma in 1936.

Social work was little known in Oklahoma at the time and in 1936 Jo became one of the pioneers of her field in the state. She began her career with the Works Progress Administration (WPA) in Guthrie. Later she was assistant supervisor of the National Youth Administration division for young women in Tulsa. When the State Division of Child Welfare was formed, she became a child welfare worker with dependent and neglected children, also working with foster and adoptive families. She worked with Kay County Child Welfare for many years. Serving children and families was her passion in social work. She continued her concern for children throughout her life.

Jo and Roy were married October 30, 1938, in Perry, OK. For their first two years they traveled as “doodlebuggers” with Roy’s seismograph crew, primarily in Louisiana. In 1946 they moved to Ponca City. They enjoyed a strong love, an exceptional partnership, a special relationship, and a good and happy life – a marriage that continues as a great model for all of their family. Roy and Jo celebrated their sixty-seventh wedding anniversary prior to Roy’s death in May of 2006.

Her greatest interest outside her family was her church. She was an elder in the Presbyterian Church, sang in the choir, and was active in the Women’s Association, serving as president for two years and holding numerous offices.

She was a longtime member of the Tuesday Book Club and the American Association of University Women. She served on the Kay County Child Welfare Board for more than 48 years.

Jo hated violence and war. She was concerned for all peoples’ welfare. In addition to her personal commitment toward peace, she supported many Presbyterian and secular organizations that shared her dedication.

In 1977 she and her nurse friend, Jan Giles, saw the need and began advocating for a residential retirement facility in Ponca City. Jo chaired the Presbyterian Women’s committee whose dream and vision evolved through broad community participation into Westminster Village. She and Roy sustained this commitment through its planning, building, and implementation. In appreciation for the Gartens’ many years of leadership and service, the board of Westminster Village dedicated the dining room and social center as the Garten Center in their honor.

Apart from her many societal accomplishments, Jo was especially known for her silly nature and quick sense of humor. She truly enjoyed people and built friendships with individuals from all walks of life. Family members, friends, and community members could always go to her for an open ear or a bit of encouragement. Jo was a deeply loving and joyful presence in all the lives she touched throughout her 93 years.

She was preceded in death by her husband, Roy, her parents, and two sisters, Lucinda Thornton and Mary Lee Campbell.

A service will be held at 10:30 a.m. on Tuesday, February 13, 2007, at the First Presbyterian Church with the Rev. Andy Gifford, pastor, officiating. Burial will take place on Tuesday, February 13, 2007, at 4 p.m. in the Kansas Cemetery in Piedmont, Okla. The family suggests memorial gifts to the Roy and Jo Garten Memorial Fund, First Presbyterian Church, 14th and Grand Ave., Ponca City, OK.