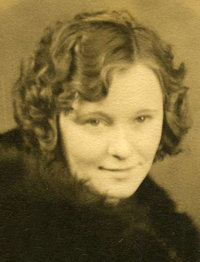 Born February 1, 1912, in Lahoma, Oklahoma, she was the daughter of George and Anna (Grundeman) Lampe. She moved to the Perry area about 1920 with her family and graduated from Perry High School in 1932.

She was a member of the Christ Lutheran Church, Lutheran Women’s Missionary League (L.W.M.L.), Black Bear Home Demonstration Club for a number of years, and a 4-H Club Leader.

Surviving her are her parents, George and Anna Lampe; a daughter, Mrs. Doris McDaniel; a son, Robert of the home; a brother, Ervin Lampe; two sisters, Mrs. Evelyn Bay and Mrs. Lucille Allen, Ponca City; one grandson; and numerous other relatives.

Funeral services will be 2 p.m. Friday in the Christ Lutheran Church with Rev. Edwin Lange officiating. Burial will be at Grace Hill Cemetery.