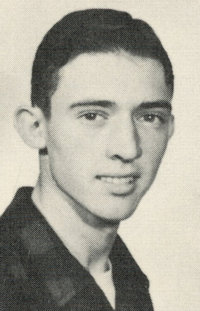 Bill Alfred Barr, 28, was killed instantly Sunday when an oil derrick collapsed and fell on him in the field near Blackwell.

Born December 22, 1928, in Cleveland, Oklahoma, he was the son of Homer and Ellis (Bogan) Barr. He spent most of his life in Perry. Following graduation from Perry High School in 1947, Barr served four years in the Marine Corps.

He was married September 24, 1949, in Tulsa, Oklahoma, to Patricia Joan Pruett, who survives.

He had been employed by Schlumberger since 1949. He was a member of the Methodist church.

In addition to his parents, Barr is survived by his widow and three children, Grant, 6, Marlis, 5, and Brenda, 3.

Funeral services were held at 2 p.m. Tuesday at the First Methodist Church. Rev. Bervin Caswell, who recently was assigned as pastor of the Pecos, Texas, Methodist church, will return to conduct final rites. Burial will be in Grace Hill Cemetery.