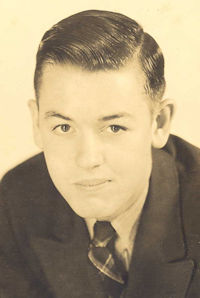 – son of Mr. and Mrs. J. H. Foster, Jr., is a member of the high school basketball team, track team, National honor society, orchestra and for the past two years has been drum major of the band. He plans to be a doctor.

Mr. Foster was born in Perry, Okla., the son of the late Joseph and Catherine (Marshall) Foster. He graduated from Perry High School in 1938.

He retired after 37 years with DuPont at the Savannah River Plant. He was a Christian of the Presbyterian faith.

Surviving, in addition to his wife, are two daughters, Leslie Foster and Cynthia Foster, both of Aiken; one brother, David Foster of Albuquerque, N.M.; two grandchildren, Gregg Law and Joseph Law; three step-children and nine step-grandchildren. He was preceded in death by his parents.

A graveside service will be held at Bethany Cemetery in Aiken, South Carolina, with the Rev. Alan Harmon officiating.