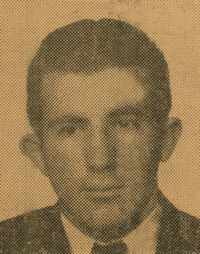 He was a member of the Perry high school wrestling squad in 1939-40, in which sport he lettered. His hobby is horses.

Madison was born Dec. 11, 1920, In Guthrie to Walter and Klyce (Malone) Madison. He graduated from Perry High School, and after graduation, he entered the U.S. Army and was discharged in 1945.

He earned a degree in business from Oklahoma State University in 1951, and owned and operated the Madison Maytag store in Arkansas City until he retired in 1975.

Madison married Violet Mae Flowers in Stillwater June 9, 1944. He was a member of the Baptist Church, American Legion, Veterans of Foreign Wars, Shriners, American Legion Disabled American Veterans and was a 32nd-degree Mason.

He was preceded in death by his parents, wife, three brothers and one sister.

Madison is survived by one son, Gary Madison of Tulsa; one daughter, Pamela Sears of Copan; one sister, Pat Fuqua of Nashville, Tenn., and three grandchildren.

Services will he at 10:30 a.m. Friday, Sept. 4, at the Strode Chapel with the Rev. Tom Moll officiating. Burial will take place at the Fairlawn Cemetery.