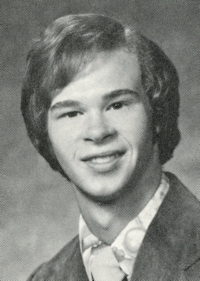 Born April 4, 1959, he was the son of Bob and Deanne (Hudiburg) Ketch. He attended Perry high school, graduating in 1977. In 1982 he graduated from Oklahoma State University with a degree in Interior Design. While at OSU he was president of the American Society of Interior Design and was a member of the OSU Band.

For the past five hears he worked in Oklahoma City as a independent professional interior designer. He was one of 51 designers who participated in the 1986 Symphony Decorators’ Show House, 1521 N. Hudson, Oklahoma City. His music room in the show house is featured in the November issue of the Oklahoma Home & Garden magazine.

He will be interred at Sunset Memorial Gardens and Mausoleum, Stillwater, Oklahoma.