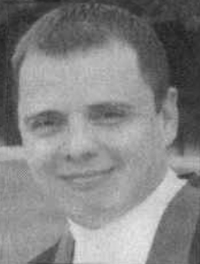 Belford was born in Waukegan, Ill., Sept. 6, 1969, to William Belford and Judy Anderson. He attended school at Central Junior High and elementary in Zion, Ill. He then grew up in Perry and graduated from Perry high school in 1989.

He received a degree in carpentry from Indian Meridian Vocational-Technical and O. T. Autry Vo-Tech. He then attended college one year a Southwestern College of Christian Ministries studying music ministry. He later moved to Perkins.

He was a member of the Coyle Assembly of God and worked as a correctional officer. He led two southern gospel groups, Chosin and At His Mercy Quartet.

He was preceded in death by his grandmother, Thelma Hattendorf, and his grandfather, Neal Anderson.

He is survived by his wife, of the home; his father of Illinois; his mother, Judy Jones, and her husband, Daniel Jones, of Stillwater; two sons, Gabriel Sean Belford and Carlton Cole Belford, both of Perkins; three brothers, Billy Belford of Stillwater, Shane Holderly of Rogers, Ark., and Shannon Holderly of Stillwater, and two sisters, Dawn (Shepherd) Scott of Stillwater and Kandi Shepherd of Georgia.

Services will be Tuesday at 10:30 a.m. in Coyle Assembly of God Church. Verlin Kelly will officiate. Burial will follow in Sunset Memorial Gardens in Stillwater. A family memorial fund has been established in care of Strode Funeral home, Stillwater, Oklahoma.