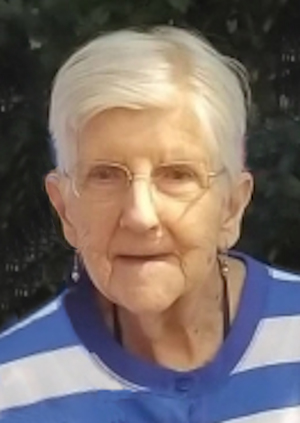 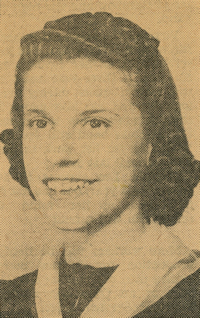 ﻿Phyllis Lorraine Schurkens, the daughter of Mr. and Mrs. H. W. Schurkens, was born on November 11, 1924, in Perry. She attended St. Joseph’s Academy in this city until her seventh year in school.

She has been treasurer of the student council during the past year, and also was secretary of her sophomore class. She has been in the band for three years, and has taken part in the mixed chorus.

Phyllis is a member of the band’s drum ensemble, and was selected for the tri-state mass band. She was a candidate for basketball princess. her senior year in school.

She plans to attend the Oklahoma A. and M. college next year.

Phyllis Lorraine Wurtz, 96, a longtime resident of Perry, passed from this life on November 17, 2020, in Tulsa.

On November 18, 1946, she and Clarence Wurtz were married at St. Rose of Lima Catholic Church and they made their home in Perry. Her husband preceded her in death in 1977.

Her daughters and their families were the loves of her life and she enjoyed spending time with them. She was an avid sports fan and especially enjoyed watching the Oklahoma State Cowboys and the Oklahoma Thunder play.

Phyllis is preceded in death by her husband, her parents and one brother, Jack.

There will be a private graveside service held for the family. Memorials may be made to the American Cancer Society or American Heart Association c/o Dighton Marler Funeral Home, PO Box 189, Perry, Oklahoma 73077.