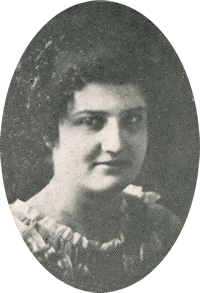 “And studious let me sit.”

﻿Monday night brought the news from Hayward that Edith Dishman, 19, a beautiful high school graduate from the Perry school last spring, had attempted suicide at the home of her parents, Mr. and Mrs. M. Dishman, by drinking lye water and that she was in a precarious condition.

Miss Dishman was the prize scholar of the class of 1916 of our high school, having the honor of being valedictorian. She had also done a greater portion of the work on the annual, issued by the school. Application to her studies and the extra labor brought on a nervous breakdown. Later improved, she accepted a school near Enid. Sickness came on again and she resigned and went to the home of her parents. Recuperating from the rest, she took another school near home and again was compelled to give up to sickness. Disheartened and discouraged, she sought to end her troubles Monday by drinking the lye water. She was discovered before death came on and medical aid being summoned. Every effort was made to save her life. She suffered until Tuesday evening when her life passed out.

It is with more than ordinary regret over such an occurrence that the misfortune of Miss Dishman is reported. She was brilliant, energetic, too much so for her health, and loved by teachers and students.

She was predeceased by a brother, Homer Dishman.

Surviving to mourn her loss are her parents; three brothers, Leroy, Emmett, and Glen; and one sister Ada Bell.

Miss Dishman will be interred at the North IOOF Cemetery in Garfield County, Oklahoma.