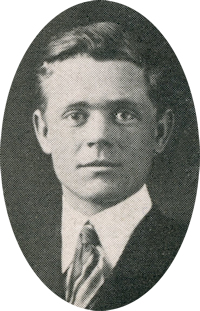 “I think, therefore, I exist.”

Born February 15, 1896, in Rushville, Mo., he was the son of Joseph Washington Howard and Lena Ottie (Conard) Howard. His family came to the area at the opening of the Cherokee Strip and farmed northeast of Perry. In 1917 he graduated from Perry High School.

Although his studies were interrupted by overseas service in World War I, Howard received his law degree from the University of Oklahoma in 1922.

From 1934 to 1946 Howard was assistant U. S. attorney in Tulsa and then moved to Muskogee as attorney for the regional office of the Veterans Administration. He opened a private practice in Pawhuska in 1962 and was appointed Osage County judge the next year.

He is preceded in death by his parents; two brothers, Wayne Bruce and Robert B.; and a sister, Mary Jeanetta.

Survivors include his wife, Nell; one brother, Dewey Lee Howard; and a sister, Dora Maude.

He will be interred at the Pawhuska City Cemetery, Pawhuska, Oklahoma.