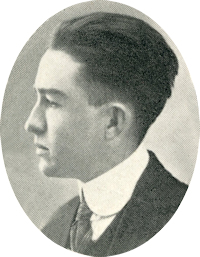 “And still we gazed, and still our wonder grew,
That one small head could carry all he knew.”

A native of Liberty, Mo., Hurt was the son of Rev. Minor Benjamin and Anna Belle (Laird) Hurt. He graduated from Perry High School in 1918 and attended the University of Oklahoma on a voice scholarship. While in college he participated for two seasons with the White and Meyers Chautauqua company. He received his LLB from OU in 1922.

He served two terms as county attorney in Pauls Valley and served as an assistant to a State Supreme Court judge prior to World War II.

He had served on the legislative committee of the Tulsa Chamber of Commerce and at one time was listed in Who’s Who in America.

He was a former chairman of the board of deacons and had been active in the music department at First Baptist Church in Oklahoma City.