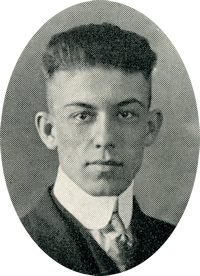 Born May 30, 1897, on a farm west of Perry, he was the son of William E. and Artie Lorrene Johnston. He graduated from Perry High School in 1918 and served in World War I in the motor transport division of the Army.

On his return home he entered the automobile business, later going to Oklahoma City where he was in the employ of the Marland Oil Company.

On November 16, 1922, he and Margaret Williams of Geary, Oklahoma, were married in Guthrie.

Johnston had worked in Texas, Illinois, Oklahoma, and Kansas oil fields for the past 20 years. He became seriously ill last year and returned to Perry before entering the Oklahoma City hospital two months ago.

He was a member of the Presbyterian church.

In addition to his father of Perry, survivors are a son, W. R. Johnston of the Marine Corps, serving at Pearl Harbor; a niece, Mrs. Phyllis Wurtz of Perry; and an aunt, Mrs. George Guthrie of Perry.

﻿Final services will be held Thursday at 2 p.m. in the Newton funeral home. Rev. David Thomas of Stillwater will conduct last rites and burial will be in Grace Hill cemetery.