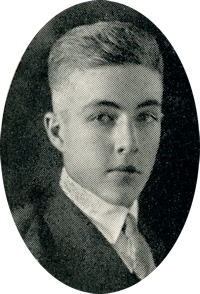 “He never indulges in the dainties found in text books.”

Born in Perry on February 7, 1900, he was the son of the late Harry A. McCandless, one of the founders of the Exchange Bank & Trust Co., and Florence (Dorrance) McCandless. He graduated from Perry High School in 1918.

He was a World War II Navy veteran and attended Oklahoma University.

He and his wife, the former Elinor Magee, moved to Sun City in 1963 from Kansas.

McCandless was preceded in death by his mother and one sister, Esther McCormick, in addition to his father.

Memorial services will be at 11 a.m. today at the First Presbyterian Church, 12225 N. 103rd Ave., Sun City, Arizona. Graveside memorial rites have been set for 2 p.m. Monday at Grace Hill cemetery with Rev. Jim Dunkin, pastor of the First Presbyterian church officiating. Contributions may be made to the Residents Assistance Fund at Sun Valley Lodge.