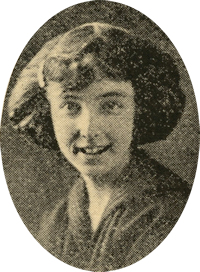 “Greater women than I have lived, but I doubt it.”

Mrs. Albert (Esther) McCormick, 47, died Tuesday, March 18, in an Alhambra, Calif., hospital. She had been ill since December, and underwent surgery one week ago.

Born May 16, 1904, in Perry, she was the daughter of Mrs. H. A. (Florence) McCandless and the late H. A. McCandless. She graduated from Perry High School in 1922 and attended Lindenwood College, Missouri, for a year before entering the University of Oklahoma.

Prior to her move to Alhambra, she taught school in Ponca City about 10 years.

Her father, the late H. A. McCandless, was cashier of the Exchange Bank until his death in July 1923. Her mother had made her home in Ponca City with a son, R. D. McCandless, until last year, when they moved to Oklahoma City.

In addition to her father, a son, Bruce, preceded her in death.

She is survived by her mother; her husband, Albert; one son, Stephen, of Alhambra; and a brother, Robert D. McCandless.