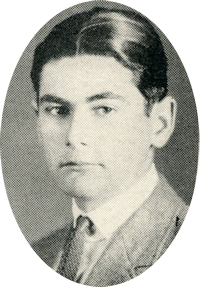 “His only books were woman’s looks,
And follies they’ve taught him.”

Following his graduation from Oklahoma A. & M. he took a position with the Perry Mill and worked as an assistant sales manager for the Gold Medal Flour Co. in Oklahoma City.

He and Viola Elizabeth Knebel were married on October 12, 1935.

Merry was a retired executive with General Mills.