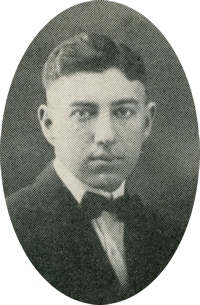 “Ambition and love
A slave to both is he
But when ambition goes astray
He talks of love every day.”

Born June 12, 1900, in Morrill, Kansas, he was the son of Charles and Margaret Hoover. He graduated from Perry High School in 1920 and began work for Gypsy Oil.

Mr. Hoover worked for Gulf Oil for 21 years before accepting a position as store manager for the Bethlehem Supply company in Seminole, where he worked for five years before his death.

Survivors include his wife, Loraine; two daughters, Margaret and Pat; and a son, Harry, Jr., all of the home address.

Services will be conducted by Rev. Dwight Hunt at 2:30 p.m. Tuesday at the First Methodist Church. Burial will be at Maple Grove cemetery, Seminole.