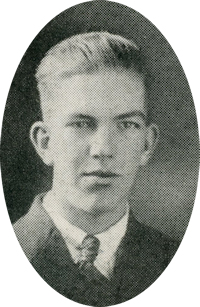 Born in Olathe, Kansas, July 5, 1903, he was the son of Ona Herman and Nellie May (Filkin) Newcombe. He graduated from Perry High School in 1920.

Shortly after graduating, his family moved to Lawrence where Ernest attended the University of Kansas. He was a member of Delta Sigma Lambda, which was the National De Molay fraternity, and graduated with a degree in journalism in 1925.

He and Eunice Mueller were married on Christmas Day, 1924. They were the parents of two daughters, Mary and Judith; and two sons, Forrest and Ernest. Eunice died in 1984.

Mr. Newcombe worked as a high school printing teacher and as a salesman for a publishing house.

Burial will be at Wichita Park Cemetery and Mausoleum, Wichita, Kansas.