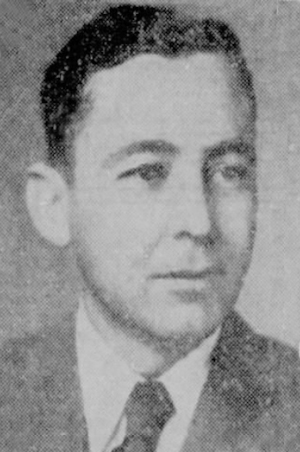 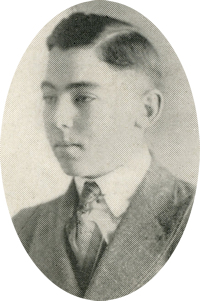 “There may be some hard work in him, but none ever came out.”

Born May 23, 1903, he was the son of Theodore “Dode” and Ida (Renfro) Goley. He graduated from Perry High School in 1921 and was a 1925 graduate in the school of agriculture at Oklahoma A. & M. Goley was very active in campus activities as a member of the National Dairy club, the Aggie society, R. O. T. C., and Chi Beta, local social fraternity.

In 1926 he accepted a position on the J. C. Penney farm at Courtland, New York, where he worked with the famous Penney herd of Guernsey cattle. This was one of the leading herds of milk cows and it was only Goley’s unusual record at Oklahoma A. & M. and his outstanding record in judging and caring for cattle that earned him the position.

He and Winifred W. Morgan were married July 6, 1927, in Poughkeepsie, New York. In 1929 moved to Sapulpa, Oklahoma, where Goley served as secretary-manager for the Chamber of Commerce.

They made a subsequent move to Enid in 1931 when he accepted the position of Manager of the Gold Spot Dairy. He served in this position for more than 30 years.

Goley was very active in the community as a member of the Enid Kiwanis Club, president of Oklahoma Agricultural Cooperative Council, chairman of the Enid Chamber of Commerce dairy improvement committee, and vice president of the Enid Retail Merchants Association.

Preceding him in death were his parents and wife, Winifred.

Interment will be at Memorial Park Cemetery, Enid.