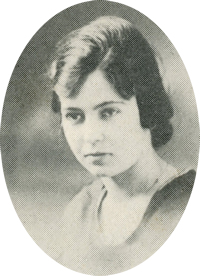 “Things don’t turn up in the world
Until somebody turns them up.”

Born March 21, 1901, she was the daughter of Theodore “Dode” and Ida (Renfro) Goley. She graduated from Perry High School in 1920 and attended Oklahoma A. & M. for three years.

She and Glenn A. Springer met while students at Oklahoma A. & M. and were married July 16, 1924, at the Presbyterian manse in Winfield, Kansas. They made their home in Wichita, Kansas, where Mr. Springer was employed at Standard Oil Company.

They lived in Lawrence, Kansas, and Norman, Oklahoma, before moving to Oklahoma City.

She was predeceased in 1966 by her husband.

Survivors include her two sons, Frank and Harold, and a daughter, Mrs. Larry Tower.

Interment will be at Memorial Park Cemetery, Oklahoma City.