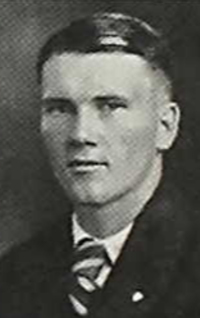 Kenneth LeCrone, 26, former Perry youth, and son of Mr. and Mrs. A. W. LeCrone, died in an Oklahoma City hospital late Monday night as the result of an illness that has extended over the past year. The immediate cause of death was an infection. He was taken to the hospital Monday.

LeCrone was born October 16, 1908, near Goltry, Okla., and came to Perry with his parents in 1921. He graduated from Perry High School with the class of 1926 and in 1932 received a Bachelor of Science degree from the Oklahoma A. and M. school of commerce. He was a member of the Sigma Chi social fraternity.

For the past several years he has been employed in Texas and points in Oklahoma as a bookkeeper for the H. H. Enders trucking lines.

Besides his widow and parents, he is survived by a sister, Mrs. Georgia Skalenda, also of Perry.

Funeral services will be held at 10:30 Wednesday morning from the First Christian Church in Perry of which he was a member. Following the services here, burial will be in the Good Hope cemetery near Helena, Okla.