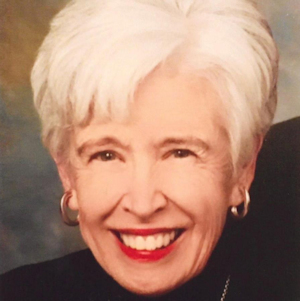 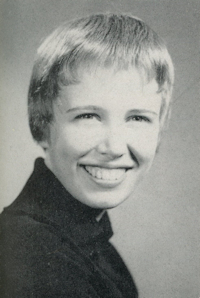 Bettye Kaye (Yahn) Evans died on December 14, 2020. She fought a courageous battle with Parkinson’s disease but never let it rob her of her glorious smile and generous heart. Even in her last days when confined to a wheelchair or bed she often said, “How can I help you?” And she meant it!

Bettye Kaye and eventual husband Gary grew up living catty-corner across the street from one another in Perry, OK. Her parents were Glen and Eleanor Yahn, and Bettye Kaye was delivered by Gary’s father, Dr. A.M. Evans. As the only child of two working parents, she fixed lunch for her parents every day beginning in 7th grade and became an exceptional cook. She played saxophone in the Perry High School band and was elected Perry High School Wrestling Queen in 1956. An early claim to fame was winning the title of Miss Perry and getting to make several appearances with film star Buster Keaton, who lived in Perry during his younger years.

Although living catty-corner from each other, they did not actually “go out” until Gary was in Medical School and she was in college. She graduated from OSU with a degree in elementary education and was a proud member of OSU Kappa Alpha Theta sorority. After graduation she and Gary married in 1962. She taught school in Oklahoma City and Tulsa during Gary’s final year of Medical School, and during his post-graduate years of internship, residency, and employment as an assistant professor of Radiology at University of Oklahoma Hospital in Oklahoma City.

After moving to Muskogee in 1969, she became a full-time mom transporting their four children and their friends to an incredible number of events. She helped deliver Meals on Wheels in Muskogee for several years, and she was a member of Service League of Muskogee and Chapter B of P.E.O. She loved flower arranging, party planning and decorating.

She was a faithful congregant of First United Methodist Church in Muskogee and served on various committees and boards. She recognized God’s handiwork in trees and flowers and put a fresh bouquet on the coffee and donut serving counter at the First United Methodist Church every Sunday morning for many years. She sang in the vocals choir and played in the hand-bell choir. She especially loved serving as a member of the building and grounds committee and was involved during the building of the church’s Activity Center and in the acquisition, refreshing and maintenance of several parsonages.

She loved to travel, and her parents hosted the entire Evans clan on trips to Orlando, San Diego, Honolulu, Seattle, and Phoenix. She and Gary accompanied daughter Jill (as member of the NCA Pom Pom squad) to Ireland for the St. Patrick’s Day Parade and Governor’s Ball. She and Gary went with several Perry friends on a self-styled European train trip to Rome, Lucerne, Paris, Normandy, and London; and went with several Muskogee friends on river boat cruises to Paris and Northern France, and Southern France, and to the Netherlands.

She became the primary care arranger for her elderly parents and traveled to their home in Perry at least once a week for several years to check on them and oversee their caregivers. Her giving spirit was always and only directed toward others.