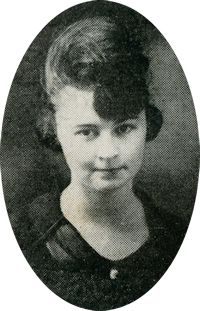 “A dream of poetry that, written or told,
Is exceeding beautiful.”

On January 30, 1927, she and Charles Bradford were married in Rogers County, Oklahoma. They made their home in Tulsa.

She served as a Christian Science practitioner.

Preceding her in death were her husband, Charles; her father and mother; and one sister, Koto. A sister, Lola Pam Mouser, survives.