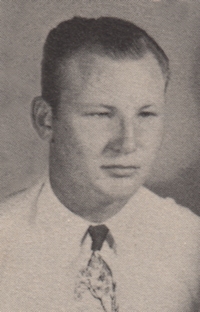 Bible prayer was held Monday evening in the chapel of Shipman Funeral home. Funeral was at 10 a.m., Tuesday, at Holy Cross Catholic church in Wagoner, OK. Burial was in the Pioneer Cemetery.

Skalenda was born in Perry, June 28, 1932. His parents were William and Clara (Neuerburg) Skalenda. He served two years active duty in Korea with the United States Navy and two years inactive status with the Naval Reserves.

He made his home in Wagoner, OK, before moving to Tool 10 years ago. He was a member of the Veterans of Foreign Wars in Texas and had served as president of the American Legion in Perry.

Skalenda was preceded in death by his parents, one daughter, Ladonna Skalenda, in 1980; and one brother, Vernon Skalenda.