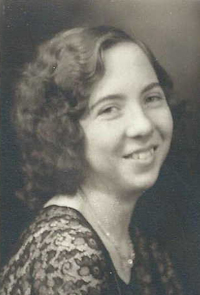 Born April 19, 1914, in Billings, Oklahoma, she was the daughter of Irvin and Leona (Hicks) Kindt. She graduated from Perry High School in 1933.

Naomi and Chester Pearce were married and made their home in Billings before moving to Tonkawa in 1944. Mr. Pearce predeceased her in 1959 after a short illness. Subsequently, Naomi and Karl Max Wold were married.

At the time of her death Naomi was employed by Milling Precision Tools, Inc., as a punch press operator.

Survivors include a son, Shairyl of East Peoria, Illinois; a daughter, Mrs. Joan McGuire of Ferguson, Missouri; a brother, Leonard Kindt of Pomona, California; and a sister, Mrs. Mabel Simmering of Billings, Oklahoma.

Services will be held at 7:30 p.m. Friday in Wichita with interment next to her first husband at 1:30 p.m. Saturday at Memorial Park Cemetery, Enid, Garfield County.