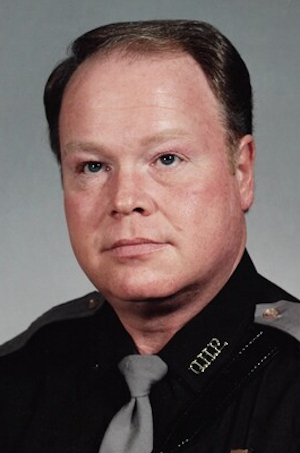 Rick Myers was born in Stillwater, Oklahoma, on April 7, 1948. After graduating from Perry High School, he joined the army and served three years as an MP, earning the rank of sergeant. In 1971 Rick joined the Oklahoma Highway Patrol, where he proudly served the citizens of Oklahoma for nearly three decades. After assignments in several Oklahoma communities, he chose Wagoner for his home.

After retirement Rick continued his work in law enforcement with the U.S. Marshals, Tulsa International Airport, and the Wagoner County Sheriff’s Department, but Rick was a Trooper first and foremost and proud to be a Trooper’s Trooper, valued as a partner you could always count on and the guy with the shiniest brass and cleanest car on the force. He fought for his fellow Troopers as president of their association and was able to lead a delegation to the White House, where he met President George H.W. Bush.

Rick’s world revolved around his daughter Lauren and the children and grandchildren of his two beloved sisters Karla and Deanna, but his fellow law enforcement officers were his second family. He was dedicated to them and they were by his side constantly through his illness and final days. Rick will be remembered as a loving father, a dedicated friend, an honest lawman, and if Heaven has Harleys, we know Rick is already cruising down the road to his next adventure.

Rick departed this life Wednesday, November 4, 2020, in Tulsa, Oklahoma, at the age of 72 years. He was preceded in death by his parents, Arlie Leo Myers and Juanita Mae (Coffman) Myers, grandniece Taytum Quigley, and grandnephew Tyler Frank.

Left to cherish his memory are his daughter, Lauren Richel Myers of Tulsa; his two sisters, Karla and husband, Jimmy Karcher, of Perry and Deanna Frank of Stillwater; his nephews and niece, Tracey and wife Andrea Karcher, Jaramie and wife Billee Karcher, Reyn and wife Teria Frank, Raynae and husband Darryl Quigley, Coy and wife Jeanne Frank, and Corbin and wife Kimberly Frank; his grandnieces and grandnephews, Ava and Ty Karcher, Kaylee, Kaycee and Ethan Karcher, Cheyenne Frank, Ashtyn and Peytyn Quigley, and Brooklyn and Madison Frank; and extended family and friends.

A memorial service will be held at 3 p.m. Monday, November 9, 2020, at the First Baptist Church, 401 Northeast 2nd Street, Wagoner, OK. Chaplain Sam Garner of the OHP will officiate. Funeral Honors will be presented by the OHP Honor Guard. In lieu of flowers, the family requests memorial donations to St. Jude, a cause that was dear to Rick’s heart.