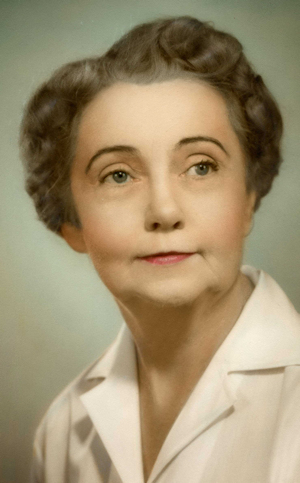 Born July 16, 1894, in Mulhall, Oklahoma, she was the daughter of John Edward and Julia Ann (Kelly) Meyers. She and her sister, Mary, made their home with their aunt, Mary Kelly, who lived in Perry. She graduated from Perry High School in 1914 and became a teacher. Her first teaching position was in 1915 in Morrison, Oklahoma.

She moved to Liberal, Kansas, in 1917 to teach the first grade at Garfield School. Little did she dream that she would continue teaching that grade, with the exception of one year at McDermott School, until May 1961.

Wooed by a prominent young Liberal businessman, Herbert F. Dir, they were married May 29, 1922. They made their home at 308 West Fifth and reared two sons. Mr. Dir was in the real estate and insurance business in Liberal until his death in 1936.

During her long career she taught generations of students. In a letter from the Superintendent of Schools, M. P. Forker, received at her retirement, he states, “It should be a great pleasure for you to confidently feel that your teaching service in the Liberal School has been the most perfect example of devotion to the profession and performing a duty in a degree of efficiency that would be difficult to excel by anyone in your profession. Thank you very much.”

While living in Liberal she was a member of St. Anthony’s Catholic Church, American Association of University Women, and various teachers professional organizations.

In addition to her husband, she was also predeceased by one of her sons, Richard, in 1979.

Mrs. Dir is survived by her son, Herbert Franklin Dir, Jr., and his wife and three granddaughters.

Her burial will take place at River View Cemetery in Portland, Oregon.