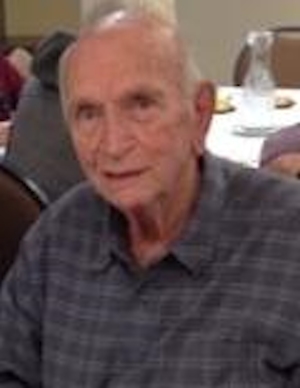 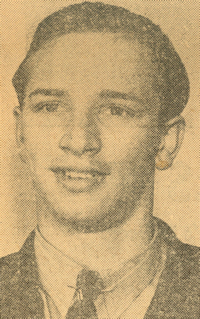 He attended school one year at Oklahoma City, and has spent the other 11 years in the Perry school system. He was a member of the student council in the eighth grade, and has taken part in basketball, football and wrestling.

Robin is a member of the DeMolay chapter here and of the Letterman’s club. He has two letters in football and one in basketball. He also took part in the junior class play.

Hunting, fishing, and the collecting of match covers are Robin’s favorite pastimes. He intends to study engineering later at the Oklahoma A. and M. college.

Robin lived an amazing life and helped many. He served in the Nation’s Armed Forces for nearly 25 years during WW-II, the Korean War and two tours in Vietnam.

After his military career he served our Nations youth as a leader and executive in professional Boy Scouting for over 20 years including District Executive in Kansas and Missouri, Finance Director for the Aloha Council in Hawaii and U.S. Territories throughout the Pacific, Scout Executive for the Yosemite Area Council in Central California. Robin culminated his career as Director of Boy Scouting for the Pacific Northwest spanning Washington, Oregon, Idaho, Northern California and Alaska.

One of Robin’s greatest accomplishments in life was the construction of Camp John Mensinger, the premier Boy Scout Camp in the Sierra Nevada Mountains. Built from the ground up with his best friends, John Mensinger, Freddie Weiss, and hundreds of donors and volunteers, this world class scouting institution will serve America’s youth for generations to come.

His love of the outdoors took him around the world, fishing and hunting in some of the most beautiful places on Earth. Alaska, his most favorite place on Earth, is where he spent many a day fishing the remote rivers and waters for Coho “Silver” Salmon and Halibut.

Robin joins his wife of 37 years, Maurine Johnston, his infant son Richard Johnston, his father Oklahoma Governor Henry S. Johnston and First Lady Ethel L. Johnston in heaven along with many friends from this great nation.

After the passing of his wife Maurine, Robin continued to enjoy life to its fullest with his partner and great friend Harriet Rivers of Modesto, California. They traveled the world together inspiring the youth of today and tomorrow in China, Panama, Colombia and traversing the Lewis & Clark Trail across America.

Robin was a proud man who always wanted to help others before himself and lived life on a simple principle, PRIDE – Professional Results In EveryDay Efforts. Carrying on Robin’s legacy is son Commander David Johnston of the US Coast Guard, and wife Andrea along with his treasured grandchildren, Whittaker and Harriet, all of Washington D.C.

In lieu of flowers, if desired, a contribution to The Alexander Cohen Hospice House or a would be greatly appreciated. www.hospiceheart.org