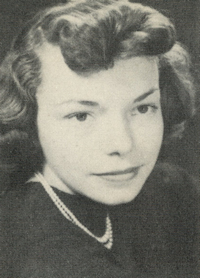 Mrs. Bunnie Lee Klinglesmith has gone to her heavenly home. She was 89 years young. She was born and raised in Perry, the daughter of Edward James Ewy and Zelma Lucretia Branham Ewy. Bunnie attended Perry schools from 1st through 12th grades. She married the love of her life, Donald Klinglesmith, on July 2, 1950, in Perry. They settled down and raised a family of their own here. The couple had a son, Kyle, who was her pride and joy. Bunnie worked until retirement at Perry Public Schools as a School Secretary.

Funeral services will be held at the First Christian Church of Perry. Reverend Josh Bell will officiate. Burial will be at Grace Hill Cemetery of Perry.