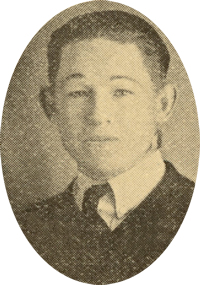 “A whiz with the women.”

Harold A. Boggs, son of Gertrude Boggs and A. A. Boggs, was born at Perry, Oklahoma, August 20, 1904. He spent his life among the people of this community and was a friend of all who knew him.

Harold attended the Perry school, graduating in 1922. He was a leader among his fellows and loved by his classmates. He entered heartily into the school activities, playing baseball, football and basketball. He was assistant editor of his senior class annual and carried leading parts in many school plays.

He was a member of the DeMolay in his youth and later joined the Modern Woodman and Knights of Pythias lodges.

After finishing high school, he attended the Agriculture and Mechanical college for one year and, since that time, he has been employed by the City Drug company where his genial smile won him the friendship of his townspeople.

Harold was united in marriage to Miss Louise Ann Whitaker, August 1, 1928, and to this union was born one daughter, Donna Jean.

After a few hours’ illness, he died in an Enid hospital, September 23, 1930, leaving to mourn his departure, his devoted wife; his mother and father; his grandmother, Mrs. Ann Boggs; two sisters, Mrs. LeRoy Miller, of Wichita, and Mrs. Stanley Hinks of Waynoka; one brother, Harry Boggs, of Perry; and a community of friends.