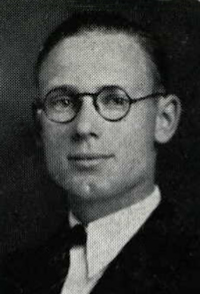 He was born on July 11, 1911, in Chautaqua County, Kan., the son of John E. and Amanda E. (Roper) Brown. He attended grade school at the School of the Ozarks in Grenola, Kan., was a 1929 Perry High School graduate, and attended Oklahoma A. & M.

He began his first career with the J.C. Penney Co. He managed stores in Winfield, Manhattan, and Colby, Kan. He answered his country’s call and served with the U.S. Navy in the South Pacific Theater from 1943 to 1945. Returning to Colby, he was active in the community, serving as lay leader of his church and was a past president of the Colby Chamber of Commerce and a past commander of the American Legion and the Veterans of Foreign Wars of Colby, Kan.

After his retirement from the J.C. Penney Co., he worked in public relations and became associated with the Kansas City Life Insurance Co.

He moved to Lander in 1970 and on Oct. 1, 1971, he married the former Lydia Mae (Roper) Campbell. The couple became partners in the business and traveled extensively.

He was a 50-year-plus member of the Masonic Lodge, a member of the Lander Shrine and Olivet Chapter No. 3, Order of Eastern Star. He was an excellent gardener and shared his bounty with anyone in need. He was active in the Lander and Sheridan senior citizens centers.

He was preceded in death by his first wife, LaVina, two sisters, three brothers and two great-grandchildren.

﻿Funeral services will be held on Saturday at 11 a.m. at the Chapel of Mount Hope, Hudson’s Funeral Home, Lander, Wyoming, with the Rev. Earl Detweiler of the United Methodist Church officiating. Those wishing may contribute to the church or charity of their choice. Memorial contributions may be left or sent to Hudson’s Funeral Home, 680 Mount Hope Dr., Lander 82520.