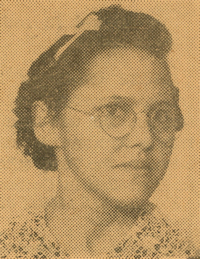 ﻿- 19 year old daughter of Mr. and Mrs. Emil Schiewe, route 1, Perry. She was born near Morrison February 22, 1921. Before coming to Perry to school she attended the Pleasant Hill school, Perry Lutheran school, high school in Coffeyville, Kans., and Caney, Kans.

In 1937-38 she was in the office training club and she has received a perfect attendance certificate for a year of school. Her hobbies are collecting songs and keeping a scrap book.

She is undecided about attending college but plans to become a bookkeeper.

Born Feb. 22, 1921, in Noble County, Oklahoma, she was the daughter of Emil and Albertine Schiewe. She graduated from Perry High School in 1940.

Services will be at 11 a.m. Tuesday in Greenwood Funeral Home. Don Hensley of First Church of Christ will officiate. Burial will be in the Oak Hill Cemetery, Cherokee, Iowa.