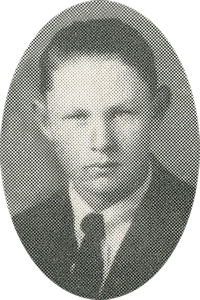 Born on March 5, 1911, in Garber, Oklahoma, he was the son of Lewis Milton and Grace Lee (Cockrum) DeVore. He graduated from Perry High School in 1929.

Mr. DeVore graduated from Central State Teachers College, Edmond, in 1934. He played varsity football and baseball while in college, and later coached at Mangum High School while teaching business subjects. He joined Amoco and worked as an accountant until his retirement in 1967.

Mr. DeVore was a veteran of WWII, a member of the First Christian Church at Huntsville, TX, and a founding member of the Rev. Isidore Robot Society of St. Gregory’s College, Shawnee, OK.

Services will be at 2 p.m. Wednesday, Aug. 3, 1988, at the Smith & Kernke Funeral Chapel in Oklahoma City, OK, with interment in the Harmony Cemetery in Logan County, OK.