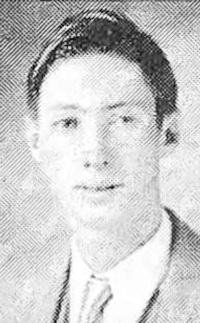 Born October 2, 1915, in Stillwater, Oklahoma, he was the son of Robert Newton Elliott and Anna Laurie (Bowers) Elliott. The Elliot family moved to Perry in August 1923, for Robert N. Elliot, Sr., to join the administration of Perry High School as principal.

Even before Robert Junior’s graduation from Perry High School, he had an avid interest in aviation. In 1927, when he was 12 years old, he wrote an article supporting the construction of a local airport, which was published in the Perry Daily Journal. As a junior in high school he was invited by the state chamber of commerce to attend an aviation banquet in Tulsa at which the Spartan medal for the outstanding Oklahoma aviator in 1929 was awarded. At this banquet, aviators and prominent state officials were guests with the air-minded Perry lad the only youth to be invited to the event.

Mr. Elliott graduated from Perry High School at the age of 16 and attended Oklahoma A. and M. College, where he was active in the symphony and military band. He graduated from the Institute of Technology at Boston, Massachusetts. He was elected to Phi Eta Sigma, Honorary Engineering Fraternity.

He was associated with Pan American Airways, Consolidated Airways and Boeing at Wichita before taking a position in the student instructor detachment at Randolph Field in Texas.

In November 1943, he and Stella “Marguerite” Campbell were married in Wichita, Kansas. They were blessed with five children before their divorce.

At the time of the accident Mr. Elliott was the pilot of a plane chartered by James Croce, an American folk and rock singer-songwriter, and his entourage. They were taking off from the Natchitoches Regional Airport in Natchitoches, Louisiana, after a performance of Jim Croce’s Life and Times tour at Northwestern State University. In addition to Mr. Elliott, others killed in the accident were Jim Croce, Maury Muehlelsen, comedian George Stevens, manager and booking agent Kenneth D. Cortese and road manager Dennis Rast.