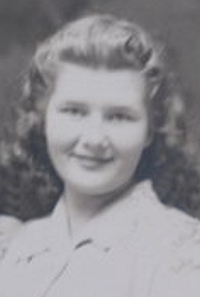 Sarah and John Niles Glover were married during her senior year, on December 5, 1942, in Perry. They made their home in Wichita, Kansas, and were blessed with two children. Mr. Glover died in a plane crash in 1965.

Surviving are a son, Philip, of Tacoma, Wash.; a daughter, Lois Hubbard of Edna, Kansas; a brother, Samuel Melugin of Colfax, Calif.; sisters Edna Burkhart of Gentry, Ark., and Lillian Zemp and Eva Law, both of Perry, Okla.; three grandchildren; and two great-grandchildren.