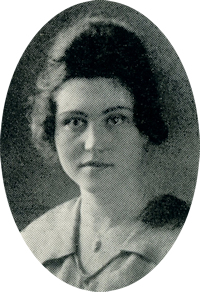 “Quiet of disposition, musical of soul, efficient and undemonstrative.”

Born March 10, 1899, she was the only daughter of Charles Vincent and Marietta Guthrie. The family moved to Perry in 1914 to open a hardware store. Bernice graduated from Perry High School in 1918 and for three years was a student of voice and piano at Oklahoma A. & M. College in Stillwater. She was an accomplished musician, both as a singer and an instrumentalist. After her graduation from PHS, she won third place in vocal music at Norman, OK, in statewide competition and the following year was awarded first place in the contest conducted at A. & M. College.

On June 5, 1921, she and Homer H. Hirzel of Guthrie were united in marriage. He was a 1920 graduate of A. & M. College. For a year he was employed by Halsell-Frazier wholesale grocery company, as a salesman, before joining his father in the grocery business at Guthrie, where the couple made their home. Mr. Hirzel died in 1942.

Mrs. Hirzel remained active with her music career serving as organist for the First Christian Church in Guthrie, performing trios with her daughters Mary Louise and Bernice, and teaching piano and vocal music.

Burial will be at Summit View Cemetery, Guthrie, Oklahoma.