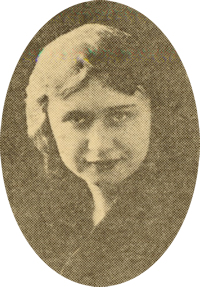 “She has been taking Domestic Science. Moral: A way to a man’s heart is thru’ his stomach.”

Mrs. Florence A. Jehlicka, 62, of Enid, formerly of Perry, died Saturday at the home of a daughter, Mrs. Joseph (Kathleen) Smith in Atlanta, Ga., where she had been visiting.

Born in 1903, she was the daughter of Perry pioneers Edwin R. and Ida (Schott) Martin. She graduated from Perry High School in 1922 and attended Oklahoma State University.

She was a member of the Altar Society and Cecelia Club, was a Camp Fire group leader and did extensive work for the Red Cross during World War II.

Survivors include a daughter, Mrs. Smith of Atlanta; a son, Jerry, of Enid; three grandchildren, Breanda, David and Jana Jahlicka of Enid; two sisters, Miss Ruth Martin and Mrs. Steve Svelan, both of Perry, and a brother, Edwin Martin of Perry.

Rosary will be at 7:30 p.m. Monday in the Henniger-Allen chapel in Enid and requiem high mass will be at 10 a.m. Tuesday in St. Francis Xavier church in Enid with Rev. William Naberhaus officiating. Burial will be in Mt. Carmel Catholic cemetery here at 11:45 a.m. beside her husband, who died Jan. 21, 1955. Rev. John O’Brien of Perry will officiate at the cemetery.