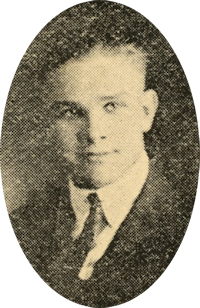 Born April 20, 1904, in Perry, Oklahoma, he was the son of Charles S. and Emma Thomason. His parents came to Noble County at the opening of the Cherokee Strip, settling on a farm northeast of Perry. He graduated from Perry High School in 1922, where he starred as a guard for the Maroon football team, which entered the state championship playoff.

Thomason, an oil field worker, died after suffering a hemorrhage in circumstances similar to the illness that proved fatal April 16 to his sister, Mrs. Nina Neal, Perry. Thomason was en route to a job in Cheyenne, Wyoming, traveling in a car driven by Newman Wolleson, also formerly of Perry. He was stricken about a mile from Limon, officials said.

In addition to his mother of Perry, he is survived by his wife, Gladys; and a stepson, Jack Armour, Great Bend, Kansas.

Services will be at 2 p.m. Tuesday in the Newton Funeral Home. Rev. Caswell, pastor of the First Methodist Church, will officiate at last rites and burial will be in Grace Hill cemetery.