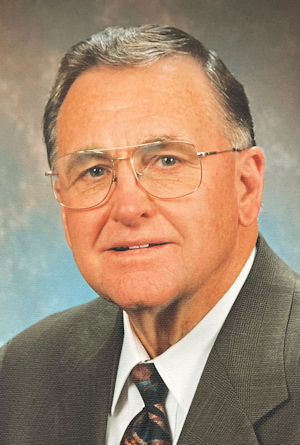 Joe C. Sewell Jr. was born July 30, 1927 on his family’s farm one and a half miles east of the Black Bear Bridge on U.S. 77 in Noble County. His parents were Joe and Elva Sewell. He was reared on the farm where they raised wheat, corn, oats, cotton & alfalfa, and operated a dairy business. He attended the Rose Hill country school from first through eighth grades, and then enrolled in Perry Public Schools where he continued his education. Joe played football for Coach Hump Daniels and was on the traveling team as a freshman and made the varsity team as a sophomore. Perry football went undefeated during that time until Joe’s senior year when they played against Tulsa Central in the semi-finals losing 28-31. Joe suffered a dislocated shoulder in the 4th quarter and didn’t get to finish the game. Joe was in the graduating class of 1945 of Perry High School.

Immediately after graduation, he was drafted by the military and joined the U.S. Navy where he served one year. Joe’s company was assigned to LST (a landing ship craft) of which they decommissioned. After they were finished, he had accumulated enough points to leave the military.

In 1946, he enrolled at Oklahoma A & M, now Oklahoma State University, majoring in agriculture and was on the meat judging team. He graduated in 1950. His first job was teaching agriculture to a class of 27 veterans in Corn, OK. A tornado leveled the school and class members scattered to other towns. There was no longer anywhere to teach, so he moved to Oklahoma City. Ivan Tompkins, a friend from college, was working for Wilson & Company and told Jake Sims about Joe. He was hired to work for Jake Sims Commission Company, selling hogs, sheep and cattle. “It was a pretty good chore,” said Joe. “I had to get up at 5 a.m. every morning and I was making less money than when I was teaching. I lived with Tompkins while I worked in Oklahoma City for about 18 months,” said Sewell. “I then decided to come back to Perry and work on the farm helping my dad.” He farmed a year, then went to work for the Agriculture Stabilization Service in 1956 as a field supervisor. “I had 25 men working for me,” said Sewell. “They were really a good crew. I worked at this job until 1960.”

At this time, L. E. Plumer was Vice President at First National Bank & Trust. Carl Hamm, President of the bank, decided to bring someone in to help Plumer. He called Sewell and offered him a job with the bank as the agriculture representative. “Plumer was a very good man and taught me well,” said Sewell. “I enjoyed working for him. He was a true gentleman. I worked in every department in the bank.”

During his career, First National Bank & Trust became First Bank & Trust Company (FB&T). Joe became President of FB&T in 1997 and worked in that position until he retired in August of 2000 after 40 years of service. “I had a lot of good customers who were also friends,” said Sewell. “You could depend on their word. If they told you something, their word was their bond.” Joe remains an active member of the Bank’s Board of Directors.

In addition to his banking career, he ran about 100 cows and took care of them at the farm. “I grew up on the farm and wanted to stay in touch with farming,” said Sewell. Joe was very proud to have the original Sewell family farm north of Perry, registered as a 100-year Oklahoma Centennial Farm in 2021.

Joe and his wife JoAnn were married 62 years before her death in 2017. He and JoAnn traveled a lot during their years together and visited almost every state in the nation. Joe has two sons; Joe and Shawn. He has two grandchildren; Shannon and Michael, and one great-grand daughter Andyn.

He has been a member of the Lions Club since 1960, was involved with the youth of the Noble County Free Fair for over 50 years, was honored by the Oklahoma Bankers Association for over 50 years in the banking industry in 2021, and is a member of the First Presbyterian Church. When asked about his longevity, he said, “I prayed a lot and the good Lord just took care of me. I just stayed in there, battled my way through and worked hard.”