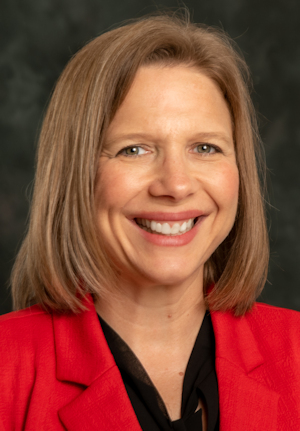 A 1993 graduate of Perry High School, Diana Morris Watkins, a doctoral student in Oklahoma State University’s Higher Education and Student Affairs Program, received her master’s degree in Teaching, Learning and Leadership from OSU. Her bachelor’s degree in Secondary English Education is an Honors Program Degree from OSU. Watkins began her career teaching high school English in Ardmore, Oklahoma. Her move to post-secondary education came in 2000 when she joined the Oklahoma State University Honors Program, now Honors College, as an academic counselor. She taught English at Perry High School in 2001 before spending four years as an “early childhood educator,” taking on the role of full-time mom until her daughter began pre-K.

Named Vice President for NOC Stillwater in March of 2019. Watkins’s tenure at the NOC/OSU Gateway Program began in 2005 as an adjunct instructor in the Language Arts Department. In 2007 she was named the Distinguished Adjunct Faculty Member for NOC Stillwater. After joining the Language Arts Department full-time in 2007, she was named the Distinguished Faculty Member for NOC Stillwater in 2009. Watkins has been an active member of the NOC community, serving on a number of committees and as sponsor of the NOC Stillwater President’s Leadership Council. Extremely passionate about student success, Watkins served on the task force that developed NOC’s First Gen Mentor Program, a program designed to assist students who are the first in their families to attend college. Watkins currently serves as a liaison for NOC’s involvement with the Pedagogy, Advising and Curricular Excellence (PACE) Project and chairs the committee on recruitment and retention for NOC’s 2019-2023 Strategic Plan. She has traveled with NOC students to Washington, D.C., to Europe on a number of short-term study tours and has taught on short-term residential programs in London, England and Dublin, Ireland. Watkins developed the NOC Honors Program in an effort to facilitate the successful transfer of NOC students into the OSU Honors College. She has presented at numerous conferences, including the National Association of Developmental Education Conference and the National Collegiate Honors Council Conference.

A graduate of Leadership Stillwater Class XXVIII, Watkins serves on the Stillwater Public Education Foundation Board of Trustees, the Stillwater Chamber of Commerce Board of Directors, and as a mentor for the Oklahoma State University Honors College. Watkins is a member of the Stillwater First United Methodist Church.

Diana is the daughter of Roy and Ann Morris. She and her husband Wade, NOC’s Dean of Global Education, live in Stillwater, Oklahoma with their rescue dog, Brewster. Their daughter, Emma, is a junior majoring in English and Critical Social Thought at Mount Holyoke College in South Hadley, MA. A four-time Semester at Sea participant, Watkins enjoys traveling, practicing yoga, running, reading, writing, and attending concerts and theatre performances.