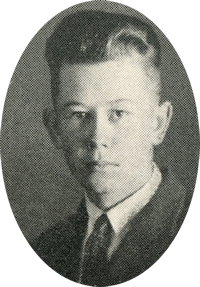 Walter McCully, 21 years of age and former Perry youth, died in an Oklahoma City hospital on Tuesday from injuries received in a fall, according to information received here.

No details of the accident were available as his parents live in Des Moines, Iowa, and since both his brother, Max, and his sister, Jean McCully, residents of Perry, were out of town.

However, McCully has been employed by Southwestern Bell Telephone company since he graduated from high school here in 1925 and it is believed by his friends here that he fell from a pole and this resulted in his death.

McCully received practically all of his education in Perry and was popular with the high school students. He also took part in athletics and was a member of the high school wrestling squad while a student here.

Shortly after his graduation he went to work for the telephone company and he has been with them since that time.

No funeral arrangements had been announced on Wednesday morning and the body was being held at the Hahn funeral home in Oklahoma City.