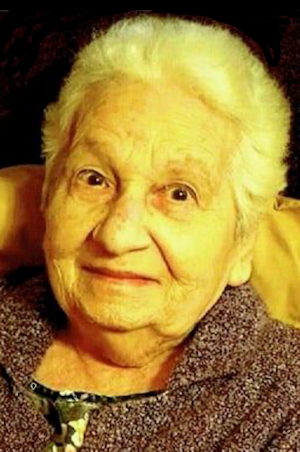 Marcella (Marki) Thompson, widow of Lyell Floyd Thompson (1924-2014), died quietly in Little Rock, Ark., surrounded by love, kindness and attention from her children and the staff of House of Three and Kindred Hospice.

She was born at home to Andrew and Amelia Horn, on a wheat farm 12 miles north of Perry, Okla. (Ceres/Red Rock). Her sister, Marjorie Loraine, was born two years later and the girls were constant playmates in the farmyard and fields surrounding their home. The sisters rode in a wagon, and later on a horse named Midget, to the one-room Pleasant Valley schoolhouse, which her father had attended. Marki established herself as a straight A student. After completing eighth grade she boarded with an aunt and cousin 12 miles from home to attend Perry High School where she continued earning straight As, except for the B in typing class. She also met her future husband in the ninth grade, on the first day of school, who always referred to her as “the smartest girl in class.”

After graduating from Perry High in 1942, Marki attended junior college in Tonkawa, Okla., and worked for the war effort testing aviation fuel in the laboratory of Continental Oil in Ponca City, Okla. In 1946, her high school sweetheart returned from wartime military service in Europe and within two weeks Lyell and Marki married. They lived in Stillwater, Okla., where they began their family. Later they lived in Columbus, Ohio, and Ardmore, Okla., before moving to Fayetteville, Ark., in 1957. Marki lived in Fayetteville, Ark., for 64 years. She moved to Little Rock to be near her daughter in September 2021.

In the 1960s, after raising her children, she completed a Bachelor’s Degree in Zoology and a Master’s Degree in Education, both from the University of Arkansas at Fayetteville. Afterward she began her 20-year career as a teacher at Asbell Elementary. She loved teaching fourth grade and former students told her, over the years, how fondly they remembered her class and the many homeroom pets they had (rabbits, guinea pigs, snakes, etc.).
While she was busy as a mother and a teacher, she also entertained a constant string of visitors to the University of Arkansas campus who Lyell brought home for planned and impromptu meals & conversations. For years, every weekend, she would drive to Perry, Okla., to visit with and help her aging parents. She spent hours every day at the bedside of her sister, Loraine, when she was terminally ill. She served as secretary at the Unitarian Universalist Fellowship in Fayetteville and taught Sunday school there as well. Her skills and interests included animals, sewing, woodworking, home maintenance and design, gardening, painting, baking and cooking festive meals with a focus on Provencal France. She also kept the Czech family tradition of baking kolache each holiday season.

She and her family traveled throughout the 50 United States and overseas. She was mesmerized by Denali in Alaska and delighted in the beauty of Hawaii. She loved the perched villages and lavender fields in Provence and the poppies and cypress trees in Tuscany. She enjoyed the history of the Czech Republic, the neatness of northern Germany, the magnificent topography of Ecuador and the culture and handiwork of Thailand.

Marki’s primary interests were focused on the happiness and comfort of her parents, her husband, her children and grandchildren. She always made time to do what they needed or wanted.

A private family service is planned in the Spring. Cremation has been arranged with A Natural State Funeral Service in Jacksonville, Ark. Memorials can be directed to The Lyell and Marcella J. Thompson Endowed Scholarship Fund, Dale Bumpers College of Agricultural, Food and Life Sciences, 479-575-4625, University of Arkansas Fayetteville, Ark. 72701.